The Rebirth of Classic
Nobody does refurbishing like the ROCKETMAN

In 1959, I purchased a new BSA Spitfire motorcycle from Paul’s Cycle in St. Paul, Minnesota. The spitfire wasn’t just a fast motorcycle it was also a very beautiful motorcycle, with it’s chrome and red gas tank and to top it off it came from the factory with racing straight pipes! It seemed like every time I pulled up next to another motorcycle at a stop sign I would get into a drag race, so I figured I had better start taking my speed addiction to the local drag strip before I ended up with a pile of speeding tickets.

The Triumph and Norton motorcycles usually dominated the 650cc class at the local drag strips. When I showed up at Minnesota Dragways with my BSA Spit fire everyone was surprised, including myself when I beat all of the Triumphs and Norton’s that showed up that day. I ended up winning a first place trophy the first time I raced the bike. I raced the bike for two seasons dominating my class. I also won the Minnesota Dragways motorcycle points race.

I wanted to do something a little more challenging so I decided to build a dual engine drag bike using two 1959 BSA 650cc.Spitfire engines. Forty years ago I didn’t have the tools, money or the ability that I have now, but I still managed to build my drag bike on the dirt floor in the basement of my old farmhouse where I lived. I started the season out by entering my drag bike in the GSTA Car Show and won first place in the motorcycle class.

I named the motorcycle the Centipede because of its long wheelbase and the four exhaust pipes that looked like legs hanging out the side of the motorcycle. Back in the early sixties they didn’t have wide racing slicks for motorcycles. So I settled for a four inch MH slick. The first time I ran the bike it handled horrible. When I shifted into forth the bike slid all over the track. When I came back to the pits. Ron Braun came over to me and said, “You should rename the motorcycle the Widow Maker”. Because of the way it handled I ended up making a number of modifications to the frame and changed the gearing to the bike. I started out in third gear so I only had to shift once. This made a big difference in the handling of the bike. I won a few trophies with the bike but I was hoping that it would be a lot faster.

At the time there wasn’t much off the counter speed equipment you could buy, but I ported and polished the heads and put in high compression pistons. This added more speed to the top end. One night at Twin City Speedway Clem Larson, a friend of mine asked me if he could ride the bike. He was about twenty pounds lighter then I was so I was anxious to see if his weight deference would increase the speed of the bike. Clem was an experienced rider but when he shifted into fourth gear he stuck his foot in the rear wheel and flew off the bike. He could have been seriously hurt if not killed. Clem ended up with a few stitches in his foot, and a lot of road rash. The motorcycle did not come out as well. The throttle was wide open when Clem came off the bike. The front motor blew a rod right thru the case and the frame was destroyed beyond repair.

In the spring of 2001 I was having a senior moment and I was thinking of the good ‘ole days when I remembered the time I was racing against Roy Egeberg, who was a dear friend of mine. I never really knew how old Roy was until after the end of a race when Roy came over to me and said, “Ky I am getting too old to do this stuff”. I jokingly replied, “So how old are you Roy?” And Roy said, “Fifty-eight years old”. I was in my early twenties, and when I heard his age it sounded to me like he was as old as Methuselah.

Well I am now sixty-three years old and I still feel pretty young. I thought I would take back the good old years and build another BSA 650cc dual engine drag bike and race it a few times so I could have the same thrill, like my friend Roy Egeberg had. I went to a couple of auctions that were put on by the Midwest Motorcycle Auction and bought two complete 1957 650cc BSA motorcycles. This time I had a little more time, money and mechanical ability. I wanted to build this motorcycle like a piece of fine polished art. Something I could be proud of when I am still on this earth and something my family will be proud of when I pass on. The primary cases, chain case, valve covers, rocker oilers and gas tank are made out T6-6061 highly polished aluminum. All the nuts, bolts and hardware are either chromed or polished. The Takasago aluminum rims were respoked with stainless steel spokes and fitted with Dunlop tires on front and back. The Lucas magneto armatures where rewound and modern condensers where installed. I purchased and polished two new 376/17 Amal Monobloc 1 1/16″ Carburetors. The frame was painted corvette yellow with a dash of orange. I used two different sets of Siamese Exhaust pipes so the carburetors would not hit the pipes.

I spent six months building the bike. I called up my long time friend Ron Braun, who was in charge of the floor plan at the car show and I said, “Ron, I am going to ask you a question I asked you forty years ago. Where are you going to put my bike in the GSTA Car Show?” Of coarse he didn’t remember so I had to refresh his memory. When he did remember he got a big laugh out of it. Well I entered the GSTA show and won first place, just like I did forty years ago! I’ve been asked by a number of my friends are you going to race the bike this summer? Only time will tell. 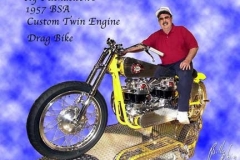 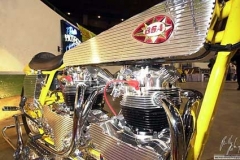 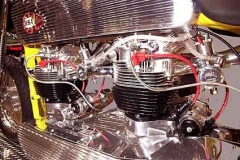 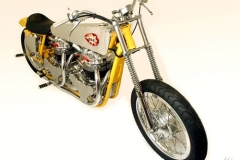 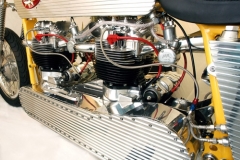 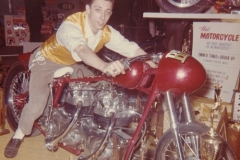 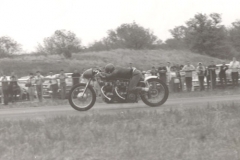 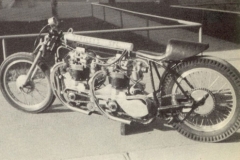 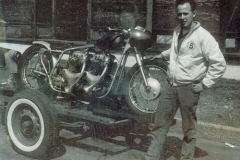 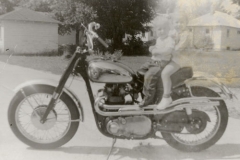 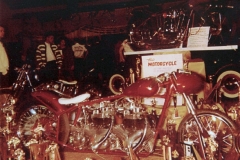